Cleveland's first appearance was in the second episode, playing Deidre Putey, wife of Palin's pathetic Arthur Putey and, about a minute-and-a-half into the sketch, lover of Eric "Marriage Counselor" Idle. The stage directions describe her as "a beautiful, blonde, buxom wench in the full bloom of womanhood", but the way she plays it, she's a lot more than a sub-Benny Hill bit of comedy skirt. Against the background of Palin's excruciatingly dull monologue of conjugal woe, Cleveland's facial responses to Idle's leering advances means she gets the first big laughs.

"There is a real touch of self-mockery there," says Palin. "She caught on very early that there was a cartoon, comic strip quality to Monty Python...that the characters would have to be stylized. She was absolutely dead accurate." Terry Jones agrees: "She does it all with total conviction, but she somehow sends up the character she is playing."

The career of Monty Python girl Carol Cleveland has had its ups and downs. It's tempting to think of Carol Cleveland as little more than the Monty Python blonde with the small parts and the big knockers. But talk to fellow Pythons Michael Palin and Terry Jones and the first thing they'll emphasize is her role as a comedienne, not just as female sketch furniture. "She could make things funny in the context of Python that nobody else could," says Jones.

On October 5, it will be 25 years since Monty Python's Flying Circus was first shown on the BBC. Although it didn't take Cleveland long to establish herself as "The Python Girl", she was at a disadvantage right from the start - mostly because the rest of the Pythons were so keen to play women themselves. "Terry Jones and I played most of the middle-aged ladies," says Michael Palin, "Eric played the younger ones, and John and Graham played the weird, in-between, men/women characters. So we didn't need women very often - except when we needed real tits, as it were."

Originally, Cleveland had only been cast because she was one of a crop of glamour stooges to the likes of Roy Hudd, Charlie Drake and Ronnies Barker and Corbett. Under the guidance of her mother, who had taken her to California when she was five, she had started modeling. At fifteen she became Miss Teen Queen, appearing on the inside cover of MAD magazine, and at seventeen she was Miss California Navy. Back in Britain, in the Sixties, she was a bunny girl.

But by the second series she was part of the team, working and touring with the Pythons right up until their last public engagement in 1980 at the Hollywood Bowl. Since then she has led a typical, partially employed life in the UK regional theatre, taking parts in plays such as The Glass Menagerie and Dial M For Murder.

You might expect her to be full of regrets - "the boys" are millionaires and have gone on to international success; Monty Python never really launched her career in the way it could have done; she never became a Bond girl ("with my looks I really should have been") and she has never really been taken seriously as a television actress.

But recently, encouraged by theatre director Sue Pomeroy, she finished writing her own one-woman show. Called Carol Cleveland Reveals All, it is the story of her life, and entirely her own work: she wrote the words and music, designed the set and even made the props. Two of the Pythons came to the premiere in Brighton, where she now lives. "It was a joy to see Michael and Terry [Gilliam] sitting there, laughing and really enjoying what I was doing."

At 52, she is still a good-looking woman: her eyes are huge and blue, her complexion has the bloom of a rose, and she smiles beautifully and often. But there are moments when the beauty cracks. Married once, engaged three times, she recently parted from the second of two candidates for "love of her life". He left because she was "too emotional" for him.

"One of my faults is that I'm just too honest," she confesses. So did she sleep with any of the Pythons, then? Her face takes on a very alert look. Instantly comic, she laughs and confides: "If I did, I'm not saying." 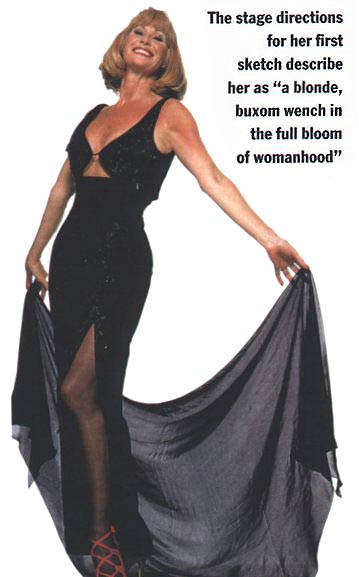 Back to Press Page